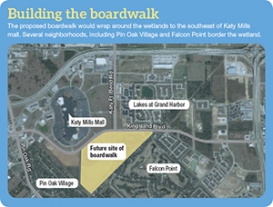 A boardwalk project planned for behind Katy Mills, south of Kingsland Boulevard, will include a convention center complex with a hotel, parking garage and zones for residential, office and retail spaces, Katy Development Authority officials said during a special workshop session before the Katy City Council’s regular meeting Jan. 12.

The project is slated to take eight to 10 years to complete at an estimated cost of nearly $49 million, accounting for inflation, said Katy Development Authority representative Steve Robinson.

The city of Katy will be responsible for about $10.5 million of the costs of the project, accounting for the parking garage and capital improvements that include drainage work and landscaping. The city is in talks with Fort Bend County to absorb some of the project’s costs, Robinson said.

The city’s portion of the bill will be paid for by a 20-year extension of the loan used to support the development of Katy Mills—the original loan was paid off in 2014, six years before its 20-year deadline, Robinson said.

The bulk of the project will be built and paid for by a private developer with the promise they will be reimbursed from future tax revenue. This model of reimbursement was used for the construction of Katy Mills Mall, Robinson said.

The future developer will build the project’s convention center along the space’s existing 80-acre retention pond. The pond will be surrounded by a 2-mile boardwalk, said Kerry Gilbert of Kerry Gilbert and Associates, the firm responsible for preliminary planning for the project.

The commercial zones will be flanked by an office park on the west and a high-density residential zone on the east, Gilbert said.

“We looked at what makes a convention center and hotel successful, and to make those things successful you need an office district, high- and low-density residential districts and some retail, “Gilbert said.

Robinson said the project would revitalize the city’s investment in Katy Mills, which is also expected to receive a $25 million facelift from Simon Property Group in the next few years.