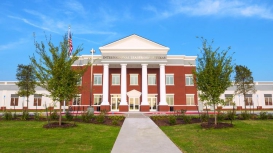 A system of charter schools will break ground on its first campuses in the Houston area on Jan. 7.

Know as International Leadership of Texas, the system plans to build campuses in Katy and the Westpark area. Both are slated to open in August for kindergarten through eighth grade students.

The Katy school will be at the intersection of Porter and Franz roads, while the Westpark location will be at Winkleman Road and Bellaire Boulevard. The system plans to add high schools at the locations in the future.

The initial schools will be about 90,000 square feet and serve about 1,400 students each. The buildings are slated to cost about $23 million to $25 million each and were designed by Idaho-based BRS Architecture. Arizona-based Vector Constructors Inc. is building the Houston projects.

The system was founded by Eddie Conger, a retired Marine Corps Infantry Officer and former Dallas Independent School District high school principal. It opened its first school in 2013 and has campuses in the Dallas-Forth Worth area in Garland, Keller and Arlington.

ILTexas is also planning to break ground on four schools this month in the Dallas-Fort Worth area.

The ILTexas schools will join a number of others that are expanding or under construction in Houston.

St. John’s School in River Oaks is completing its expansion, while a new KIPP school in west Houston near Sugar Land is open with plans for a second building.

This fall, the John Cooper School in The Woodlands moved forward on its new 50,000-square-foot math and sciences center, slated to be completed in July.

Meanwhile, Houston Independent School District had to borrow more money than originally planned last month in order to rebuild and upgrade 38 schools in the area.